skip to main | skip to sidebar

Minute to Win It

Part of our end of year fun was a grade-level attempt to recreate the gameshow "Minute to Win It." We have 6 classrooms, so we picked 6 of the show's many activities. My room was the site of the "Junk in the Trunk" contest - where you strap an empty tissue box with 8 ping pong balls on your lower back. Without using your hands, you have to shake and jump those 8 balls out of the box in less than a minute.
Repeat 120 times.
The students were creative in ways you can't imagine - trying to get those balls out of that tissue box in any way possible. Some were a little shy about looking like a fool in front of their peers, but most just shook it out. It was hilarious to watch them - and I had giggles for at least most of the first 50. I tried to keep up my enthusiasm, which was definitely a challenge after watching so many... I also tried to keep my mouth shut about ways that worked so well for people before them - I wanted them to have the chance to figure out the road to success on their own.
I had this one student whose body just didn't seem to get the memo. His head was shaking furiously, but not one part of his body was moving. We were all cheering him on, in hopes that our cheers would ignite movement in the parts of this body that would help complete the task. No luck.
I had another student who didn't want to look silly, so he tried to bend backwards (without using his hands, if you can imagine). I was truly impressed by his flexibility and balance as he bent further and further back. Until he collapsed on the box and all 8 balls inside. Good thing I had extra.
These are the moments that I love to share with them at the end of the year.
The giggling moments. 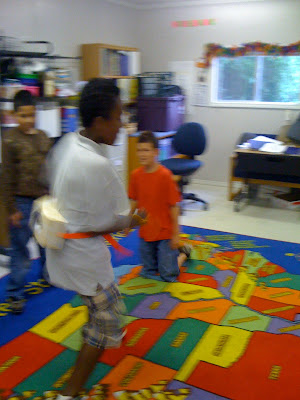 From the Brain of Unlimited

Did you know Mattel is coming out with 'Minute to Win It' based games? You should try them with your class! A new Summer Season starts tomorrow night, see if they advertise for it!